A few years ago I wrote about StatusNET, a self-hosted Twitter clone. Since then, a few things have changed. Twitter will probably be sold to whoever finally decides to risk it and StatusNET is now GNU Social. That makes it a time as good as any to have another look at what’s changed and whether GNU Social might be a viable replacement for Twitter sometime down the road.

GNU Social is a Twitter clone with quite a few enhancements. It can be self-hosted, but is federated, so people can communicate with members of other instances. It’s not exactly light-weight, installation isn’t for everyone, but in an ideal world, this would be the system to switch to once Twitter falters. In an ideal world, mind you.

When you install GNU Social, you’re presented with a piece of software that’s very similar to what you’re used to from Twitter (or the myriad of other social networks). You can post text, polls, events or images, create groups and use hashtags.

If you’re the admin of an instance, you can change the look and feel and also decide on whether you want to impose a very strict character limit or let people write novels if they feel like it.

Since the days of StatusNET, the UI has received quite some polish as well. The whole look is more streamlined and generally pleasing to the eye. 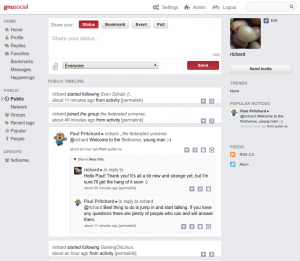 The one thing that makes it stand apart from most other clones of social networks is its federation. Even though I might have installed this on my own server, I can follow accounts set up on any other installation.

To do this, you can either add the addresses of accounts right from my own account, or you can visit the timelines of other servers and follow these accounts from there. The same holds true for groups, which you can become a member of, even though they sit on another server.

Conversations between users work well, even though replying takes a bit longer than people might be used to from Twitter, simply because it’s a more complicated process.

But wait, there’s more: you’ll want to be using GNU Social on your mobile device as well. There’s a few third party apps that allow that, most notably AndStatus, which supports Twitter, GNU Social and pump.io (another federated Twitter clone). It’s free and fairly easy to set up (especially once you’ve managed to set up your GNU Social node).

Finally, if you like the idea of GNU Social, but you don’t want to install your own instance, you can sign up with one of the bigger installations out there. Here’s a list of these bigger ones for you to choose from.

GNU Social is a complex tool, so installation requires some resources. If you own your own server or have a VPS, you’re good to go. If you only have access to shared webspace, you won’t have much luck. You should opt for creating an account on one of the servers I linked to above.

If you follow these instructions, installation will be quite straight-forward.  I’ve deducted two stars from my installation rating for the simple reason that installation won’t be possible on anything other than your own server or VPS.

GNUSocial is open-source and free of charge.